I have a confession to make: I’m a stutterer.

I’m a good/bad stutterer in that I’m usually pretty good at hiding it but sometimes I just can’t get a word out and my cheeks start to flush because I can feel people looking at me, wondering what the heck just happened.

Did you forget your name? Come again?? JUST BREATHE.

These have resulted in some pretty awkward moments, as you can imagine: 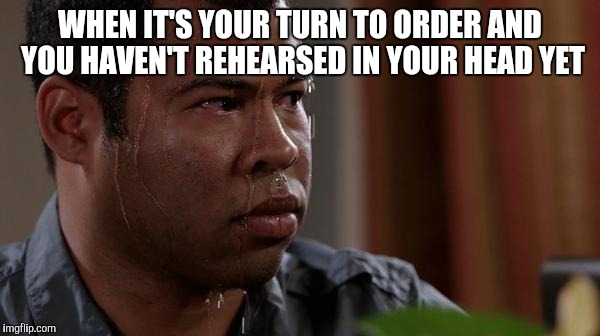 I feel as though stuttering is such a misunderstood speech impediment just because you rarely come across people that actually have it. Speaking is something that people take for granted because it’s so easy, right?

You just SAY the word. But nope, if only it were that simple.

You might be reading this and think “Oh, I stutter too when I’m nervous. No biggie.”

Yes, most people aren’t perfect speakers in that sometimes we hesitate and pause mid-speech or we may forget what we want to say mid-sentence although we know the word is JUST at the tip of the tongue. Sometimes it’s just pure nerves.

The difference with having an actual stutter though is that stuttering is mostly neurological as opposed to psychological. Although I’m sure you can imagine the psychological implications of having one.

I stutter even when I’m NOT nervous. However, being nervous does exacerbate it because what happens when you’re nervous?

Your palms are sweaty, knees weak, arms are heavy

All jokes aside, having a dry mouth and a racing heart when you’re nervous certainly doesn’t help when you already struggle with speaking without it. It’s a vicious cycle that’s hard to break, unfortunately.

It took me years to admit it, ashamed that people wouldn’t understand me or that they would dismiss it because my stutter is relatively mild compared to others.

I really wanted to write about it just in case it helps someone out there come to terms with a certain part of themselves that isn’t perfect, that’s hard to get rid of and something that’s very much an integral part of their identity that others may not understand and ridicule them for it.

Yes, it sucks big time and I wish I wasn’t constantly misrepresenting myself each time I do.

There’s always a big fear that people may view me as less intelligent just because my mouth has its own mind sometimes and won’t work the way I want it to. That maybe they wouldn’t want to be friends with me because somehow I’m ‘broken’.

The rational side of my brain knows that all of that is B.S.

The fact that I stutter is such a small part of my personality. I’m so much more than the way I talk. I’m just like everyone else.

Fortunately, I never really experienced anything traumatic in my life that could potentially explain why I stutter. I had a relatively “normal” childhood with loving parents.

The truth is, I NEVER ever want to stop talking. I have a lot of thoughts that I want to get out. Connecting with others is something that I crave so much and it hurts when I can’t say what I really wanna say because of this minor setback that feels like a boulder that I’m about to get crushed by.

Maybe, that’s why I love writing so much. It allows me to say exactly what I want to say. The words of the English language are within reach in my fingertips, they’re in my control and I can call upon them, as I wish like a sorcerer whose words are her weapons.

This is a topic that I want to talk more about in the future but just wanted to introduce it before I dig DEEP.

What is something about yourself that’s hard for you to accept? How have you dealt with it in the past?

2 thoughts on “No, I Didn’t Forget My Name – A Stutterer’s Lament”